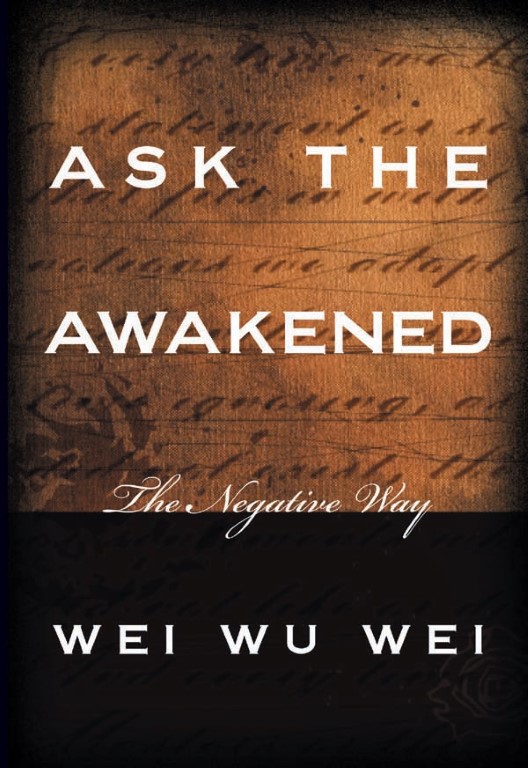 This powerful book rewards by exposing illusions, and takes the reader beyond logic to the inexpressible truth of existence with Wei Wu Wei’s unique and fresh interpretation of the ancient teachings.

Between the years 1958 and 1974, a series of books appeared that were attributed to the mysterious Wei Wu Wei. Perhaps the most important of these works, Ask The Awakened, is now available in a new edition. This work draws on a variety of sources including Taoism—specifically the texts attributed to Lao Tzu and Chuang Tzu; Buddhism—especially the Heart, Diamond and Lankavatara sutras; and Chan Buddhism as taught by Hui Neng, Huang Po, Hui Hai, etc.; as well as the teachings of Padmasambhava and Sri Ramana Maharshi, among others. This classic gem of Eastern spirituality is especially timely in the current climate of interest in Buddhism. Wei Wu Wei's unique and fresh interpretation of the ancient teachings opens the reader's eyes: "Why are you unhappy? Because 99.9 per cent of everything you think, and of everything you do, is for yourself—and there isn't one." This powerful book rewards by exposing illusions and takes the reader beyond logic to the inexpressible truth of existence. Wei Wu Wei joins Paul Reps, Alan Watts, and Philip Kapleau as one of the earliest and most profound interpreters of Zen Buddhism and Taoist philosophies. The depth of understanding evidenced in Ask the Awakened places it in the top tier of modern spiritual classics.

Praise for Ask the Awakened

Wei Wu Wei has long been one of my favorites. It is a great joy to have one of his finest books back in print. Wei Wu Wei goes right for the root. He takes away everything, and leaves nothing. Then he takes that away.

—Joan Tollifson, author of Bare-Bones Meditation: Waking Up from the Story of My Life

Really and truly Ask the Awakened is not about asking those wise men and women about their True Nature, and how on earth they managed to tap the infinite resources of that Nature. On the contrary, it's about asking yourself those same questions--and arriving at very precise answers. You are invited to reverse the arrow of your attention and look not only at what you are looking at but also at What you are looking out of. Wei Wu Wei and I promise you it's marvelous!

—Douglas Harding, author of On Having No Head