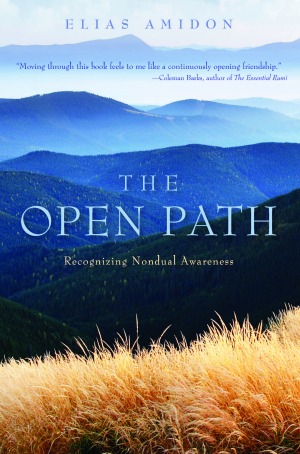 The book includes very helpful exercises and practices that foster a sense of equanimity and natural insight, as well as methods and teachings from many sources.

Interest in nondual awareness as the essence of spiritual awakening, free from the obligations and cultural references of a particular religion, is rapidly expanding throughout the Western world. Those who have sought out and followed spiritual paths, such as Buddhism, Hinduism, Sufism, Kabbalism, etc., have often found themselves coming up against a kind of ceiling in their longing for spiritual awakening. This can be a result of the religion’s cultural context or a belief system that may not see awakening as something within the reach of adherents.

So, many serious spiritual students have turned to nonsectarian teachers to further their practice. These readers will find The Open Path to be an excellent guide to the realization of the silent ground of all being and to the expression of that realization in the diverse conditions of their lives.

The book includes very helpful exercises and practices that foster a sense of equanimity and natural insight, as well as methods and teachings from many sources: Sufism, psychology, meditation traditions, and Eastern as well as Western nondual teachers.

Praise for The Open Path

A study of religious adherence by the Pew Research Global Attitudes Project found that 16 per cent of people worldwide have no religious affiliation. ‘Spiritual but not Religious’ (SBNR) is a phenomenon now widespread over the world. Disenchantment with orthodox organized religions, issues concerning rights for women and gays, and intolerance towards other religions seem to be driving people to become SBNR. Despite criticism from representatives of organized religions, SBNR is here to stay.

One way of reconciling the obvious differences in religions is through Sri Ramakrishna. His statement ‘jato mat, tato path; as many faiths, so many paths’ would be a solution to the multifaceted problems of religious diversity. However, many would not accept Sri Ramakrishna’s teachings because of cultural bias. Another solution would be to identify and associate with the impersonal Reality, hidden almost in all religions and forms of worship. It is this aspect of spirituality, shorn of externals, that most SBNR people are moving towards.

Elias Amidon, affectionately known as Pir Elias, is the spiritual director of the Sufi Way International, a non-sectarian mystical order in the lineage of Sufi Inayat Khan. His personal study of Sufism, Theravada Buddhism, Native American teachings, Zen, and Christianity is reflected in The Open Path.

Understanding the concept of an impersonal God and progressing towards it is the ultimate Goal. However, terms such as non-dual awareness, Buddha nature, unconditioned mind, ground of one’s being, and so on confuse aspirants on the path. Hence, Elias draws upon his considerable experiences and forms a series of exercises to show the way. His introductory remarks—on the distinction between the Unconditioned and Conditioned, and the paradox between the dualistic subject-object arrangements of thought and language—are great aids in correctly accessing the book. The spiritual exercises that Elias prescribes after each chapter are a further help in understanding the path.

The initial chapters on awareness and Self-enquiry are well written and seem to come from personal experience. The chapter on ‘Nonduality and Prayer’ is more rooted in Sufi mystic poetry—this chapter could have included a wider selection culled from the Upanishads, Psalms, and the Buddhist Gathas. The chapter on the ‘Art of Awakening’ is a treatise on perception, which the author rightly describes as a living art. The chapter ‘The Ocean of Kindness’ is a real treasure the author keeps for the end. Diving into Tao, Zen, and Tibetan Buddhism Elias succinctly brings out the ideas of non- dual action, equanimity, and unconditional kindness.

The Open Path will definitely supplement a seeker’s collection of books on non-duality and may also be a guide towards the mysticism hidden in orthodox organized religions.

Among many mysteries explored here: spontaneous prayer, kindness, emptiness, starting from where you are, the freedom of the universe, awakening, is one that Elias Amidon barely mentions—friendship. Moving through this book feels to me like a continuously opening friendship.

The Open Path is a powerful evocation of nondual awareness by a great teacher and friend to the world.

The Open Path integrates hitherto hidden jewels and fragrances of Sufi mastery with more classical sources of nondual teaching. The result is not only that we receive fuller and more precise instruction but that we get to experience Elias Amidon’s lucidity as a living sage and powerful lineage holder.

—James O’Dea, former president of the Institute of Noetic Sciences
and author of Cultivating Peace

It is rare and wonderful when a man, who has been such a force of good in our world, opens to us his inward path. For those who would explore the teachings of nonduality, Elias Amidon will be gratefully recognized as a valuable resource and guide.

Elias Amidon is a gifted teacher and writer. We are blessed that he has assembled his lucid and powerful transmission with such coherence and depth in this book. His capacity for tapping the essence of the world’s nondual traditions and sharing this in a thoroughly experiential way is unique. I am certain that immersing yourself in his vision and the exercises he recommends will bring you profound benefits.

Drawing on the Pathways of the great traditions, Elias Amidon guides us to Open Awareness of the Oneness of Being, with his wide Heart and clarity of experience. The Open Path will be read with joy by any reader who wishes to uncover their True Nature.

Elias Amidon’s The Open Path is an unerring guide to serve people who yearn for a spirituality that transcends religion and frees the soul from the shackles of false beliefs. Pir Elias helps the mind understand the soul and warms the heart to embrace and be embraced by the cosmic inner beloved.

Each of the great religions has a gateway into nondual reality. Elias Amidon’s lucidly clear and evocative presentation of The Open Path makes evident that the Sufis are among the gatekeepers.

Elias Amidon offers us a lucid and practical gift: how to open our hearts to awareness, to what is real. This is a loving and helpful offering that will unquestionably serve those who read it. It is truly a beautiful book.

In this lucid and graceful manual, Elias Amidon reveals a path open to all who seek. Seekers become finders. This book is a little treasure to be read again and again!

—William Ury, Co-author of Getting to Yes, and co-founder of Abraham’s Path

This is one of the clearest and most practical books I have ever read on the subtleties of recognizing nondual awareness. Elias Amidon’s heartfelt clarity carries the signature of someone who has walked the journey himself and discovered there is no road.