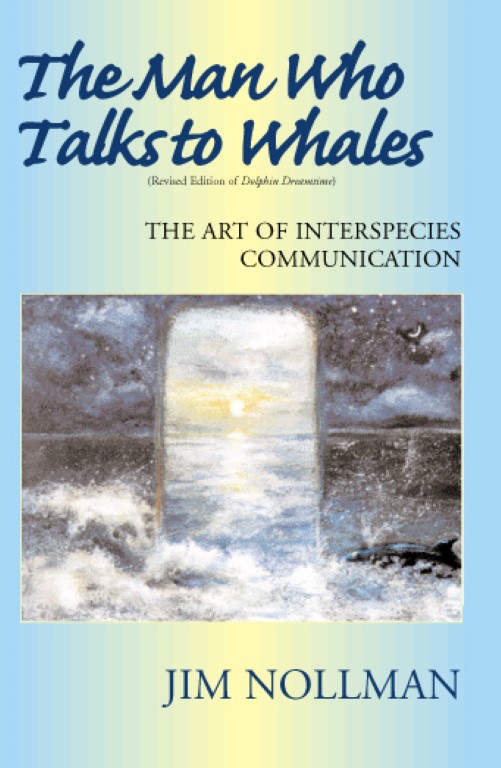 The Man Who Talks to Whales

The Art of Interspecies Communication

This book is a true account of close encounters with the wild animals of our planet and the surprising events that unfold when one man “talks” to the animals and stops to listen to their response.

The Man Who Talks to Whales is a dramatic true account of close encounters with the wild animals of our planet and the surprising events that unfold when one man "talks" to the animals and stops to listen to their response. This book is unique in its compelling tales of species-to-species interaction taking place in the animals' natural environment.

Jim Nollman is an internationally known musician and ecologist who doesn't hesitate to get up-close and personal with a pod of gray whales, a herd of buffaloes, and a school of dolphins in his quest to communicate directly with these creatures. Nollman's vivid storytelling has us swimming beside him as he ventures within ten feet of an enormous whale in the open ocean, or stepping slowly as he advances to within a few feet of a majestic bull buffalo in Yellowstone Park.

The Man Who Talks to Whales challenges us to reconsider the way we think about and relate to the animals who share our world. Nollman's writing conveys his joy and sense of brotherhood in these encounters. He does not place species on a hierarchical scale, and he lives his philosophy by relating to animals in a profoundly respectful manner.

This new edition of the book (formerly published as Dolphin Dreamtime) includes a new chapter, "Interspecies Protocol," about the idea that an animal is an individual with its own personality, deserving of respect from humans. Nollman describes the relationship enjoyed by the lions and the Bushmen of the Kalahari Desert in the first half of the twentieth century. Bushmen and lions kept very strict schedules about visiting the waterhole they shared—lions drinking late at night and Bushmen getting water during the heat of the day. There was not a single account in their history of a lion killing a Bushman or a Bushman killing a lion, until ranching was introduced to the region in the second half of the century and newcomers failed to adhere to the established interspecies protocol. There is also a substantial new epilogue to this edition that brings us up-to-date with the current state of dolphin research. The book includes twenty beautiful line drawings by the author.

Praise for The Man Who Talks to Whales

The Man Who Talks to Whales is an inspiring, thought-provoking testament that moves us closer to a common voice between homo sapiens and other species. Jim Nollman's fascinating personal experiences among orcas, dolphins, gray whales—even tom turkey and buffalo!—blend into a universal, and critical, message for 21st-century consciousness.

—Dick Russell, author of Eye of the Whale

Jim Nollman is a welcome antidote to the dispassionate approach of much modern biology. He gets involved and we are all the wiser for it.

—Lyall Watson, author of Beyond Supernature

A must-read for all those who ever wanted to talk to the animals.

—Ric O'Barry, author of To Free a Dolphin

Reading Jim Nollman is like leaving a stuffy house and going out into the open air. Powered by a Renaissance mind, this book ranks with Sheldrake's work on dogs and Goodall's on chimps. Above all, it's damn fun to read.

—Steven Foster, author of The Roaring of the Sacred River

Jim Nollman is an extraordinarily able writer whose gift lies in his ability to see both the internal and external worlds clearly and describe them honestly. That sounds simple but it's very rare.

Jim Nollman has long been a visionary and passionate advocate for the cetaceans, as an activist, spiritual ecologist and interspecies artist. Here he describes his ground-breaking musical conversations with the sea-people—and urges a return to the nature-reverencing attitude of indigenous people. His inspired and inspiring work points the way to a healing of our fractured civilization.

Here Jim Nollman not only takes us along on his unique adventures in interspecies communication. He also helps us to reclaim our own wider nature, our interexistence with all beings. This book opens the windows of the soul, lets wild and cleansing life pour in, to invigorate and guide us in a hard time. His Interspecies Protocol brings a strong and distinctive contribution to our understanding of what it will take to build a just and sustainable world.