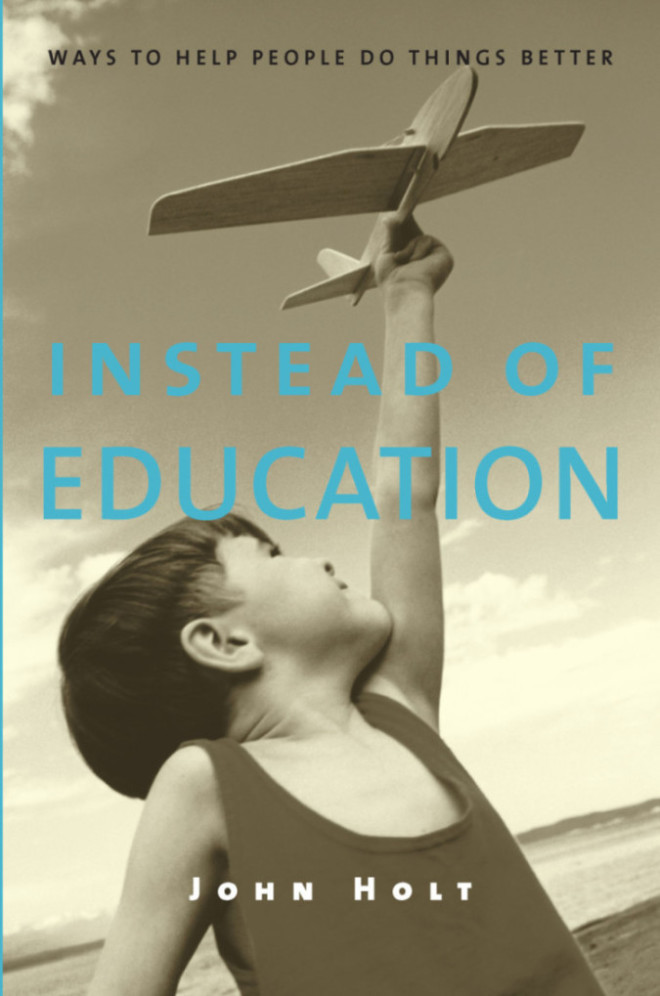 This book is a challenge to the educational status quo and a call to parents to save their children from schools. Holt lays out the base of un-schooling as the path to self-directed learning.

John Holt, best-selling author of 10 pioneering books on alternative education, is widely credited with launching today's huge and still growing homeschooling movement. His original thinking and clear, thoughtful writing has emboldened countless parents to take the education of their children into their own hands.

Instead of Education is Holt's most direct and radical challenge to the educational status quo and a clarion call to parents to save their children from schools of all kinds. In this breakthrough work, Holt lays out the foundation for un-schooling as the vital path to self-directed learning and a creative life.

It has become common knowledge that our educational system is in dire straights. Children graduate high school without knowing how to read; students are driven to violence by the brutal social climate of school; and with the ever-increasing demand for stricter discipline and higher standardized test scores, teachers have little time to convey their passion for their subject, if indeed any has survived. John Holt also makes the point that schools stifle children’s creativity and individuality. In Instead of Education he gives us practical, innovative ideas for changing all that. He suggests creative ways to take advantage of the underused facilities we already have, such as holding classes that people really want on weekdays in churches and on weekends in schools. He gives lots of examples of educational programs that work and of people who self-educate in interesting ways. He describes actual non-compulsory schools, learning centers, and informal learning arrangements in action.

He firmly believes in learning by doing, and in fact, argues persuasively that all knowledge is action. It’s “a process in the minds of living people. It is what we do as we try to find out who and where we are, and what is going on about us.” He explodes the myths hidden in the concept of learning, such as the idea that learning to play the cello is distinct from playing the cello. "This is a book in favor of DOING—self-directed, purposeful, meaningful life and work—and AGAINST 'education'—learning cut off from active life and done under pressure of bribe or threat, greed and fear. It is a book about people doing things, and doing them better; about the conditions under which we may be able to do things better; about some of the ways in which people may be able to help us (or we them) to do things better; and about the reasons why these conditions do not exist and cannot be made to exist within compulsory, coercive, competitive schools." Reading this brilliant educator revolutionizes our thinking about what schooling is for and what we can do to accomplish its true goals.

Praise for Instead of Education

Reading this book again, like reading Maria Montessori, fills me with a certain sadness that such clear vision, brilliant insight and profound understanding of the needs of children should have been offered time and time again, for so many years, to be so largely ignored. With our schooling situation growing ever more deplorable, the plight of our educationally abused children worsening day by day, Holt’s work is more critically needed than ever. He spells out the problem and its solution with such clarity and simplicity that any parent can read him and every parent should. We ignore his prophetic vision at our peril.

This book turned my thinking upside down and changed the course of my life—it inspired me to let go of my career as a frustrated schoolteacher in favor of exploring and then advocating self-directed learning. As the homeschooling/unschooling population mushrooms, many fine books and other resources become available, but none replaces John Holt's visionary, revolutionary, attentive, and specific work, as radical now as it was 30 years ago. If you haven't read him, good chance you don't fully understand the depth or possibility of our movement. In Instead of Education, Holt addresses a huge question—how can people live and work more purposefully? In doing so, he tackles many medium-sized and smaller questions--What do schools really teach? What could libraries lend, in addition to books? Why do children seem happy in a particular school in Denmark? Throughout, his writing is--as usual—simultaneously reverent and scientific.

Be clear about this: Instead of Education, although less widely known than his more famous titles, is John Holt at the top of his game. If you are one of the millions of walking wounded still staggering from your own encounter with forced institutional schooling, and trying to spare your own kids from its damage, this book will be your guide and a good friend.

—John Taylor Gatto, Former New York State Teacher of the Year, Author of Dumbing Us Down and The Underground History of American Education

John Holt was a prophetic voice in the educational wilderness who vividly explained why our system of schooling often frustrates genuine learning. He made this case quite clearly indeed in his groundbreaking work Instead of Education. It is as radically relevant to the educational challenges of our generation as it was to his.