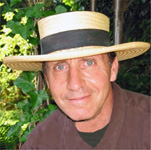 Books by this author…

Jerry Wennstrom was born in New York on January 13, 1950. “I don’t have much of an impressive bio,” he admits. “All I could do was paint, and because there was nothing else that I could do very well, painting was what I most identified with as a human being. It didn’t hold though, did it? I let it all go, became nothing, and found everything.”

Jerry was trained in art, however. “I went to school for three years at Rockland Community College and the State University of New Paltz, both in New York. The one teacher who believed in me and saw how committed I was as an artist said to me, ‘What are you doing here? Why don’t you just go out and do it?’ He said the one thing that I knew I needed to do, but was afraid to. Even though I had almost completed my degree program, when he said this to me, I walked straight out the door, never to return. I do have an A.A. degree, for those interested in my minimal credentials.”

At age 29, he set out to discover the rock-bottom truth of his life. For years he questioned the limits of his creative life as a studio painter. After destroying all of his art and giving away everything he owned, Jerry began a life of unconditional trust, allowing life to provide all that was needed. He lived this way for over 10 years and then moved to the state of Washington, where he married Marilyn Strong and produced a large new body of art. Marilyn and Jerry’s charming Whidbey Island home is now filled with his unique sculptures and paintings. He also built a 40-foot meditation tower, the Flaming Stupa, on his property.

Jerry is available for film showings, speaking engagements, and workshops with his wife—singer and adult education teacher, Marilyn Strong.

Read an article by Jerry Wennstrom in Light of Consciousness magazine. (pdf format)